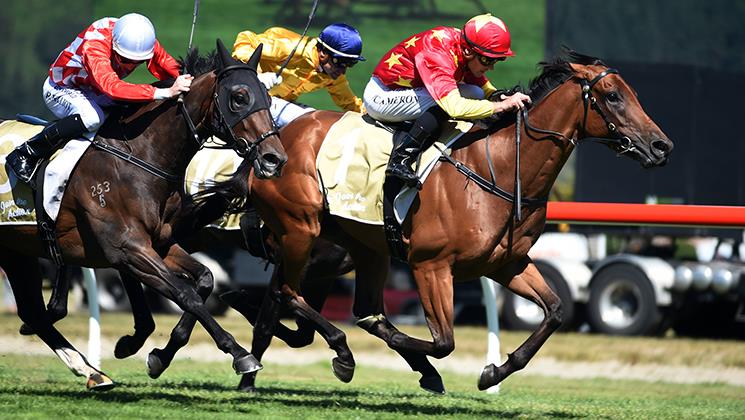 Tough-as-teak three-year-old Madison County became a dual Group One winner when he overcame some home-straight difficulties to take out the Gr.1 Fusion Electrical Levin Classic (1600m) at Trentham.

The Murray Baker and Andrew Forsman-trained Pins gelding had been unsighted on a race-track since his barn-storming finish to claim the Gr.1 New Zealand Two Thousand Guineas (1600m) at Riccarton back in November.

Carrying the familiar colours of owner, the China Horse Club, Madison County was sent out a short-odds favourite to claim his second elite-level victory despite his two-month absence from competitive action.

His supporters were on good terms with themselves as rider Matt Cameron settled his charge on the rail in midfield on a good speed set up by stablemate Espresso Martini.

Although saving plenty of ground, that inner position started to become a trap as the pair found themselves behind a wall of horses entering the home straight.

Cameron finally found a clear path at the 250m mark that Madison County took full advantage of, as he dove between runners with a powerful sprint to claim the front and victory from fellow Cambridge visitors Hypnos and Vernanme, who dead-heated for second.

“He’s not very big but he’s all heart,” Forsman said.

“He was four-back the fence and, in reality, that was always where he was going to be.

“I sort of wanted to walk away half-way through the race as I thought he had too much to do.

“He was a horse who hadn’t raced for awhile and probably just felt the pinch at the end, but he was very brave.”

Forsman indicated Madison County would now be aimed at the Listed Karaka Million 3YO Classic (1600m) at Ellerslie in a fortnight.

“Provided he comes through this well there is no reason he wouldn’t (go to Ellerslie),” he said.

“He will improve a lot fitness-wise, so hopefully he will be competitive there.”

Madison County also holds a nomination for the Gr.1 Vodafone New Zealand Derby (2400m) at Ellerslie on March 2 while he may tackle the older horses under weight-for-age conditions before then in the Gr.1 Herbie Dyke Stakes (2000m) at Te Rapa on February 9.

Bred by Garry Chittick, Madison County was a $36,000 purchase by Michael Wallace on behalf of the China Horse Club from Waikato Stud’s Select Sale draft at the 2017 National Yearling Sale at Karaka.