24 Nov: Bostonian back in emphatic fashion 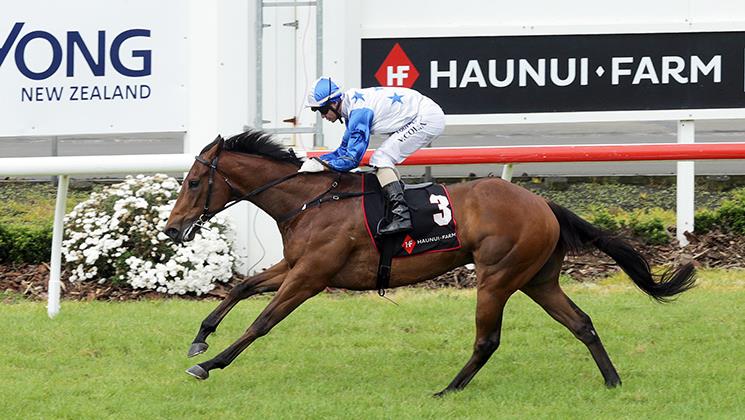 One of the best of last season’s three-year-old crop showed he was back in no uncertain terms with a dashing victory in the Listed Haunui Farm Counties Bowl (1100m) at Pukekohe.

Jimmy Choux gelding Bostonian rounded off his three-year-old campaign with a hat-trick of victories in Queensland that culminated with the Gr.3 Sunshine Coast Guineas (1600m).

A winning trial at Cambridge over 935m at Cambridge earlier this month indicated the Tony Pike-trained runner was primed for a bold first-up effort after enjoying his winter break. That proved to be the case as rider Vinnie Colgan had plenty of horse under him as he cut his mount loose in the home straight to claim his seventh career win from just 10 starts.

“It was only a quiet trial but today he was pretty push-button as it was easy in the end.

“It was a lovely run to get his campaign away.”

Owner David Archer, who had earlier watched his ten-time Group One winner Mufhasa lead out the field for the Counties Cup, indicated Bostonian would now be set for the two premier national sprints, the Gr.1 Sistema Railway (1200m) at Ellerslie and Gr.1 JR & N Berkett Telegraph (1200m) at Trentham.

The Snitzel youngster had impressed when winning on debut at Ellerslie last month and was installed a warm favourite for the event.

An awkward barrier draw saw her sit out three-wide in the early running before lodging her challenge at the top of the straight. In the hands of Leith Innes, Bavella shot clear when asked to go before cruising to the line nearly four lengths clear of debutant Aalaalune, who finished best of the chasing pack.

“She’s a professional horse with plenty of improvement in her,” Innes said.

“It wasn’t an overly strong field but she relaxed good and she’s a class filly.”

Bred and raced by Cambridge Stud owner Brendan Lindsay and his wife Jo, Bavella is a daughter of useful Zabeel mare Zonza who numbered a win at Group Three level at Caulfield amongst her five career victories.

“She might go in the paddock now and have a little break as she has done enough.

“It is so exciting although you try not to get ahead of yourself.

“The mare (Zonza) is in foal to Almanzor, our new stallion, so it’s exciting times for Jo and I.