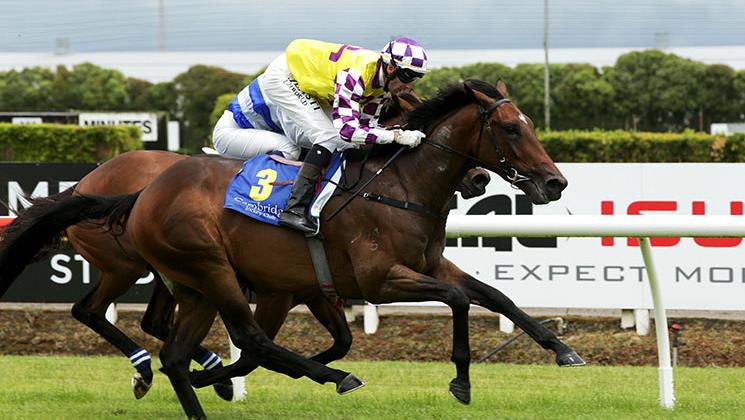 The early action at Sunday’s Te Rapa race-meeting served up a pair of three-year-olds that could well command closer attention over the coming months.

Debutant Surely Sacred created a good impression when he sat three-wide throughout before claiming the opening event over 1200m.

“He is a very attractive horse who had trialled up nicely coming into today,” trainer Tony Pike said.

“The wide gate was always going to be a trap so it was a good effort to sit three-deep on debut, without cover, and get up in what was a pretty handy three-year-old maiden.

“He’s still a bit green but once he steps up over further, he is going to be even better.”

Carrying the Raffles Racing colours, the Rock ‘n’ Pop gelding holds a nomination for the Gr.1 Levin Classic (1600m) at Trentham in January.

Out of the handy racemare Not Sure, Surely Sacred was a $160,000 purchase from the Waikato Stud Premier draft during the 2017 Yearling Sales series at Karaka.

Another with classic aspirations is three-year-old Reliable Man gelding Amano who stormed home to land the second event on the card over 1600m.

Third to subsequent Gr.1 New Zealand 2000 Guineas (1600m) runner-up Dawn Patrol on debut, Amano had disappointed at his next two runs before notching his first success on Sunday.

“He’s a lovely looking horse who just needed to learn how to run,” Archer said.

“After his first run I thought we had a real galloper here, but he went a funny race next time and then had no room in his third start.

“I was just hoping we would see the real horse today and maybe we have another good one.”

Amano is the fourth foal of Mossman mare, Lichen Moss, and is the younger sibling of multiple winners Saber and Mossomak.

A full sister to Amano will be on offer through the Westbury Stud draft during the Book 1 session at the 2019 New Zealand Bloodstock Yearling Sale series in January.