25th Jan: All About Magic impressive at Riccarton 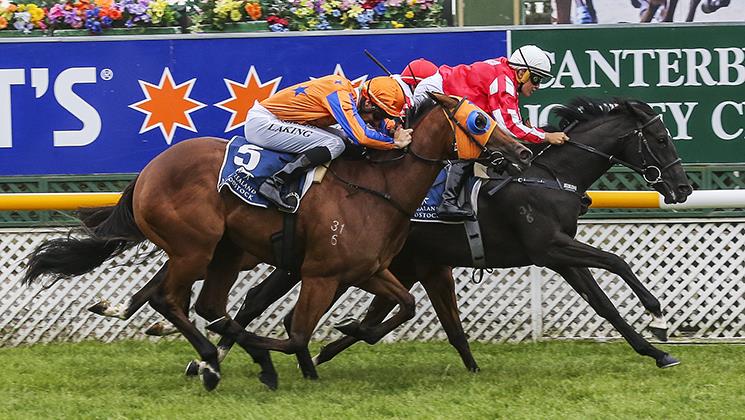 Local galloper All About Magic backed up the thoughts of her trainer Michael Pitman when she saw off the challenge of the North Island-raiders to take out the two-year-old contest at Riccarton on Saturday.

Pitman, who prepares the Showcasing filly with son Matthew, has a high opinion of his charge and wasn’t afraid to line her up in stakes company at the New Zealand Cup Carnival for her debut run, where she finished a meritorious fifth.

Given plenty of time to get over that effort, All About Magic was having just her second raceday outing when she proved too tough for Marton visitor Miss Sweet Pee and the Te Akau Racing-trained Matamata filly Vino Bella in the New Zealand Bloodstock Insurance Pearl Series sponsored contest.

After disputing the early speed, All About Magic fought best in the three-way war to score by half a neck in a slick 45.22 for the 800m journey.

“She’s from one of the best families in the Stud Book,” Pitman said.

“This is the family of Soliloquy and all those that Trevor McKee and others have done really well with.

“She had her first start in a stakes race, went off in the stalls and missed the start but she still ran on really well.

All About Magic is out of Montjeu mare, Rosecroft, the daughter of Group Two winner Soltanto who was prepared by Trevor and Stephen McKee to win seven races while also being placed at Group One level in the 1991 Champion Stakes (2100m).

Soltanto is the daughter of the Ray Verner-trained Soliloquy who won 14 races including the Gr.1 Lion Brown Sprint at Te Rapa. Owned by Richard Moore Soliloquy went on to produce multiple Group One winner Solveig along with top performers Quibble, Solstice and Soltanto.