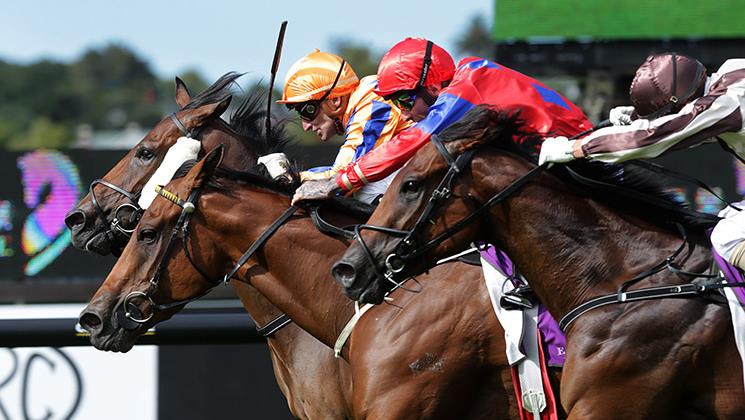 The John Bary-trained King Louis picked up his second career win and first at black-type level when taking out the Gr.3 Mongolian Khan Trophy (1200m) at Ellerslie on Saturday.

Traditionally an on-speed runner, a change of tactics to settle King Louis off the pace was discussed just minutes before the race between Bary and jockey Jason Waddell, and they proved to be the winning of the race for the three-year-old.

Waddell eased King Louis to the rear of the field from his wide gate, where under an ice cool ride he remained throughout before the pair were able to weave their way through the pack down the home straight and run down a tiring Sword of Osman.

“We tried something different today, we rode him cold,” Waddell said. “He got a little bit aggressive at the 600m, but we picked the path through and he hit the line like a really good horse today.”

Race favourite Sword of Osman had opened up a big gap down the straight, but Waddell said he was confident he could pick up the pacemaker when he saw him ducking out in the closing stages of the race.

“I thought he was a little bit too far in front of me going past the 200m, but he ducked out sharply in the last bit, which told me he was under a bit of pressure and we got the last run at him.”

Bary said the win reminded him of stable predecessor and five-time Group One winner Jimmy Choux, who carried the same colours for owners Richard and Liz Wood.

“That was exceptional, it was just like the old days with Jimmy’s colours on,” Bary said. “I’m just stoked for Richard and Liz, they are not here tonight, their son Michael is though.”

Bary was rapt with the win and said the change of tactics played a major part in the win.

“Speaking with Jason (before the race), he needs to take a bow,” Bary said. “We had spoken about the speed. The first option was to do what he did, ride him back and finish strong, and that’s what happened.

“It was a great run, he got a check at the 800m and the winner has rolled out on us and he still got up.”