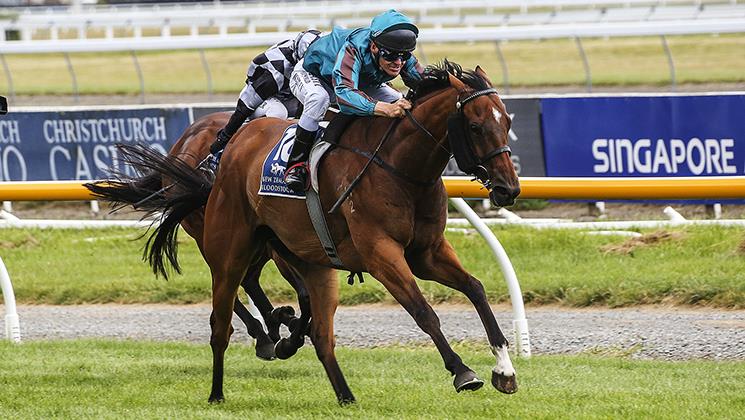 Local galloper He Kin Fly upset the applecart when he stormed to a comprehensive victory in the Listed Speight’s Timaru Stakes (1400m) at Riccarton.

The win emphasised the up and down nature of thoroughbred racing as the Darci Brahma gelding had failed to take any part in the race at his last start after knuckling badly out of the barrier and dislodging rider Terry Moseley.

Moseley stuck with the ship and produced a gem on the Neill Ridley-trained six-year-old to land the winner’s cheque this time.

Positioned beautifully in the trail by Moseley, He Kin Fly never covered an inch of extra ground throughout the 1400m feature. Angled off the fence with 300m to run, He Kin Fly burst clear to clinically dispose of Tomm Jones and Kiwi Ida, who filled the minor placings.

Ridley was delighted with the victory as he entered the race thinking that even a minor share of the spoils would satisfy him.

“I was hoping he could get a cheque but, in the end, we got the big prize,” he said.

“I’ve always thought he was good enough to win a big race, so he deserved this one.

“Things set up nicely for him as they went pretty hard in front and he likes it with the pace on.

“It was also a lovely ride by Terry.”

With the victory, He Kin Fly took his career record to five wins from 22 starts and over $236,000 in stakes earnings. His first two wins were recorded out of the Murray Baker and Andrew Forsman stable in New Zealand before being sold to Hong Kong interests in 2016.

He Kin Fly raced five times in Hong Kong, recording a win in Class 3 company, before injury resulted in his return to New Zealand in 2018 where he made his way to Ridley.

“Bruce Harvey is a part-owner of the horse and he organised for him to come to me,” Ridley said.

“He has had several knee issues but at the moment he is pretty good.

“I don’t have any concrete plans for him, we will make a decision on where he goes next once we see how he comes through this one.”