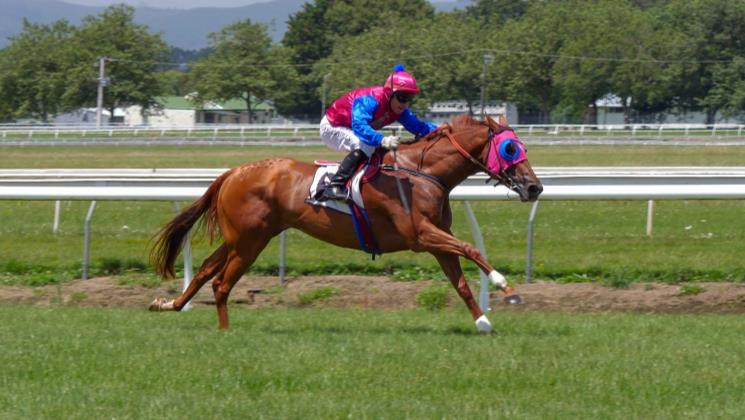 Christmas came a day later for Chrissy Bambry this year, with the Foxton trainer securing her first win when Blondlign took out the LJ Hooker 1200 at Awapuni on Wednesday.

It was Bambry’s fourth start as a trainer and she said she was delighted to have achieved her first win with a horse she has been associated with from birth.

“It was really good to get that first win,” Bambry said. “It was good of the owners, Paul Kelly and Colin Mowbray, to give her to me.

“We actually foaled her down here at home, so she’s like one of our own.”

Home for Bambry is Mangatiti Bloodstock, a 53 acre property in the Manawatu owned by her parents Tony and Judith, which encompasses agistment, training, sales preparation and equine hydrotherapy.

Blondlign has been on the property since birth and was previously in the care of Bambry’s father Tony, who she won four races for, including three straight before joining Bambry’s team late this year.

Bambry said she was confident with her runner before the race, but did hold concerns about the heavy track conditions, which resulted in only four starters lining up in the 1200m race.

“The track was the only worry. This time last year all she wanted was a wet track, but she hasn’t seemed to cope with them this year,” Bambry said.

“She was dipping and diving the whole of yesterday as well, but she is very tough. She just seems to want to keep her head in front and she’s got a big heart, so that always helps.”

Blondlign has now won four consecutive races and Bambry is eyeing black-type targets with the five-year-old chestnut if she continues her winning ways.

“She looks like she’s a bit tired this morning after running on that heavy track that she didn’t like,” she said.

“If she pulls up alright we’ll possibly look at lining her up again in a couple of weeks. She’ll just keep going through the grades at the moment, but if she can win another one we might have a crack at black-type.”

Growing up in the thoroughbred industry, Bambry said it was only a matter of time before she would join the training ranks and she decided a solo career would suit her better.

“It was probably inevitable (that I would become a trainer), with Dad training and being on the farm here. Dad also wanted to take a step back and said I deserved the recognition,” Bambry said.

“It was always an option to go into a training partnership with Dad, but I’m never one to do things by halves.

“I breed my own as well, so the ones I don’t sell it makes sense that I take them on myself.”

While pleased with the win, Bambry’s attention has quickly shifted back to the farm where she is busy in preparation for New Zealand Bloodstock’s yearling sales in January.

“I have got a Savabeel going to the yearling sales, he’s in preparation for Book 1,” Bambry said. “He’ll go through Curraghmore’s draft, but I prep him here at home.

“It’s pretty full-on (at the farm at the moment), because we give our staff the time off over this break.”