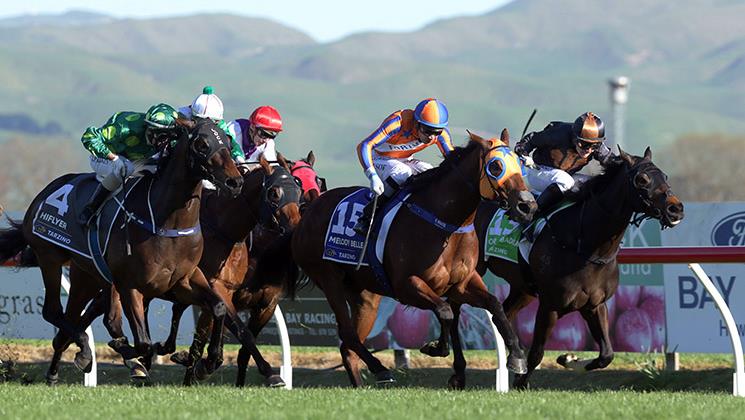 Hawke’s Bay spring carnival star Melody Belle enjoyed a winning outing at the trials on her home track at Matamata on Tuesday and looks set to add to her Group One haul.

The Jamie Richards-trained mare is unbeaten in three races this season having won the Gr.2 Foxbridge Plate (1200m) at Te Rapa before taking out a Group One double at Hastings with victories in the Tarzino Trophy (1400m) and Windsor Park Plate (1600m).

The four-year-old cruised to victory in a 1000m Open heat in the hands of retained rider Opie Bosson.

“She had a couple of weeks in the paddock after Hastings and has come back looking a picture,” Richards said.

“She really freshened up nicely so it was good to see her trial so well today.

“Opie said she felt good and did everything perfectly.”

The first target for Melody Belle is the Gr.1 Sistema Railway (1200m) at Ellerslie on January 1 with Richards indicating the mare would go into the race without a preparatory run beforehand.

“She didn’t lose much with her time in the paddock, so I don’t think she will need a race before the Railway,” he said.

“We will give her another trial at Te Aroha on December 11 to get her ready and then straight into the race.

“After that it will be the Telegraph at Trentham followed by the Group One 1400m at Te Rapa.”

“It was a good win,” co-trainer Andrew Forsman said.

“We will see how he comes through it and decide if we give him a run here or back off him and prepare him for the autumn.

“The plans are a little up in the air to be honest, but we would like to press on to the Captain Cook Stakes (Gr.1,1600m) on Saturday week and assess things off the back of that and decide what we do heading into the autumn.

“We are looking at Sydney or Brisbane next year. Sydney would be ideal if we knew there was going to be some cut in the ground, I guess that is what we will have to weigh up. We will keep our options open.”