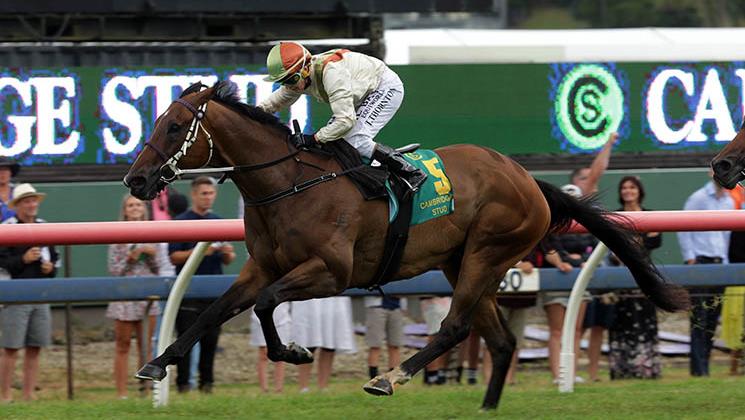 Manawatu warhorse Authentic Paddy will line-up for his fourth tilt at the Gr.1 Rydges Wellington Captain Cook Stakes (1600m) at Trentham on Saturday.

The nine-year-old gelding was runner-up in the race in his first two attempts and finished fifth in last year’s contest.

Trainer Lisa Latta is happy with her charge heading into the race and was pleased with his runner-up performance in a 1200m trial at Awapuni last week.

“He trialed up nicely last week and he’s as well as he’s ever been,” she said.

Latta isn’t overly concerned with the son of Howbaddouwantit drawing barrier 12 in the 13 horse field, believing it could possibly suit the Group One winner later in the day on the heavy track.

“I don’t think the barrier is much of a concern with the way the track conditions could be playing, I don’t think it should worry him too much, particularly being later in the day.”

His connections are hoping Authentic Paddy will add a second Group One victory after securing his first win at elite level in the Zabeel Classic (2000m) at Ellerslie last year.

The nine-year-old is on a course to defend his title, with Latta taking the same path with him as she did last year.

A stablemate that could join him on that trip north to Ellerslie on Boxing Day is promising three-year-old Lincoln Falls.

The three-year-old colt won on debut at Woodville before finishing runner-up to Langkawi at Hastings in October.

The son of Dundeel has since had a freshen-up and resumed last week in a trial at Awapuni, finishing runner-up in his 1000m heat.

Lincoln Falls is set for a race day return at Trentham on Saturday, where TAB bookmakers have pegged him as a $1.25 hot favourite for the opening race of the day, the Lone Star Petone Premier (1400m).

“I’m really happy with him. He trialed up well last week. He had three weeks in the paddock so it will be a nice starting point again for him,” Latta said.

The Awapuni trainer holds Lincoln Falls in high regard and he could be set for some lofty targets this season.

“Lincoln Raider didn’t have all favours last start. Father Lenihan’s form this campaign has been really good and the track conditions will certainly not worry him,” Latta said.

“The Ripper was disappointing last start at Counties, but they ran a pretty slow time and I just think he didn’t handle the track conditions and his first time that way around.

“They are three pretty talented horses, it’s pretty hard to separate them.”