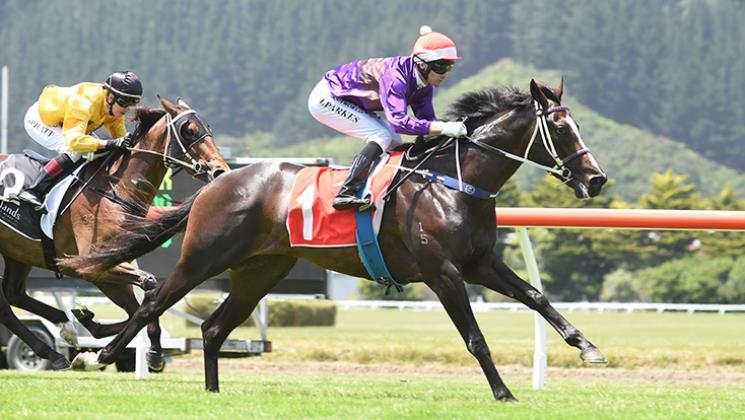 Ridden by Johnathan Parkes, Lincoln Falls sat just off the leaders before reeling in front-runner Kahu Rock to win by just over a length.

“He had to work a bit today and it’s always hard to know what to expect on an off track, but he’s done what we wanted him to,” winning trainer Lisa Latta said.

A son of six-time Group One winner Dundeel, Lincoln Falls will be set for the Gr.1 Vodafone New Zealand Derby (2400m) at Ellerslie on March 2.

The athletic colt is likely to get his first look at Ellerslie in the Listed Shaw’s Wire Ropes Uncle Remus Stakes (1400m) on Boxing Day.

“He was just a class ahead of them today and I did like the way he settled off a very slow pace and he’s travelled up really well,” Parkes said.

“I still think he is learning and every time he gets out there the penny is going to drop a little more, but he is a first-class animal and he will go on to bigger and better things.”

Lincoln Falls was an impressive winner at Woodville on debut before being beaten by a head by Langkawi over 1400m at Hastings in early October.

“He was just feeling his shins a little bit leading in to Hastings and quite a bit afterwards, so we made the decision to put him aside for three weeks,” Latta said.

“He came back and he trialed up really well ten days ago.”

A graduate of the New Zealand Bloodstock Ready To Run Sale, Lincoln Falls was sold by JK Farm on behalf of Nearco Stud for $200,000 to Lincoln Farms Bloodstock.